In stock (can be backordered)

The INRAD DMS-686 Desk Mic System has high end rise in the 2 kHz to 4 kHz range but more well-rounded audio than either of the M665 or M650.

INRAD microphones and the DMS-1 PTT locking base have received an enthusiastic review in the January 2018 issue of QST magazine.  Read the complete review here.

In stock (can be backordered)

The INRAD DMS-686 Desk Mic System has excellent transmit audio response from a unique cardioid unidirectional dynamic element. It has a high end rise in the 2 to 4 kHz range, with slightly elevated higher end output useful for DXing or use with the speech processor on, while retaining an overall well-rounded audio profile.  Black metal frame, squared off metal microphone hood. 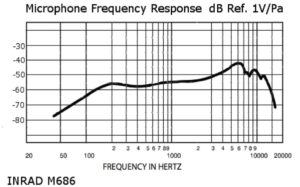 The document “INRAD Microphones And Transmission Of The Human Voice” compares the five INRAD microphone models to each other and includes frequency response curves. Download it here.

The base is metal and weighs 2.5 pounds to keep it from sliding around or being knocked over easily on the desk. Total weight of base and desk microphone, over 4 pounds! Metal microphone body, standard 5/8 x 27 thread metal standpipe, rubberized microphone clip. The circular rubber ring around the circumference of the metal standpipe for the mic clip is an internal shock mount for noise isolation.

Large push-to-talk switch on the base front. To lock the PTT for those longer QSO’s, slide the silver slider switch to the left while the PTT switch is down. To release, slide back to the right.

On the back of the base, the 1/8″ connector connects to the microphone body. The 4 pin XLR connector is used for the detachable coiled DM-series cable that connects to your transceiver mic jack.

Own multiple transceiver models with different mic jack configurations? It’s as easy as unplugging the cable from the rear of the base and connecting the next cable.

Want a different on-air sound from a different INRAD microphone? The M-series microphones on the base are also interchangeable. To change from one mic to another, unplug the 3 pin XLR cable from the back of the mic and pull it off the clip. Plug in the new mic, put it on the stand. It’s that simple.

Additional detachable DM-series cables are available to use the mic with multiple transceiver brands.